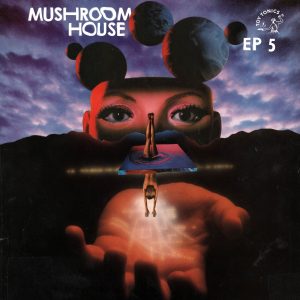 Mushroom House – The Toy Tonics series for IndieAfroDisco House comes with EP no.5. ART ALFIE and HARRY WOLFMAN made exclusive tracks. Art Alfie from Stockholm made a lot of great records with Mr.Tophat and is part of the Studio Barnhus crew. While Harry Wolfman has releases on Lost my Dog, Under the Shade and Dirt Crew on his back and is a specialist in that what somebody called the bubbling “underwater house” sound.
Both offered to do tracks for Mushroom House .. and here we are. Besides them there is also great track by The Barking Dogs. The two guys from Milan who run Serendeepity Records. The Milan record store that has been called “best records shop of the world” recently by Trevor Jackson. One of the guys is also part of Boot & Tax. Vocals on “Mamarracho” come from Marcelo Burlon. Last but not least there is ‚Make it hot‘. A psychoboogie jam by Jacky Mingo and Kapote. Made in a 3 hour jam in Berlin last summer while 42° in the studio…